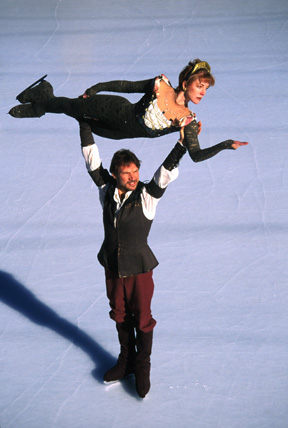 Frank and Anita are two of the hardest working people that I know. In addition to performing in ice shows full time, they also run their own company and they teach skating as much as possible. They are World Professional Pair Champions, United States Professional Champions, US Open Pair Champions, Legends Champions, Lalique International Champions and have won the “Best Presentation” award at the World Pro Championships. I have had the pleasure of working with this dynamic duo over the past 8 years. Now, I have the great pleasure of interviewing them.

Craig Heath: You two are very inspiring to me. I mean really, you both work so hard and perform all over the globe-all year round. How long have you been performing together?

Frank & Anita: Thank You! We get inspiration from you as well. We both share a joy we get from skating and have know each other most of our lives. In 1987 we decided to give skating together a try and have been a team ever since.

CH: On top of performing, you also have your own entertainment company. How do you run a company while touring?

F&A: First we have great managers that head some of the projects on a day to day basis when we are in another part of the world. We have learned that you cannot do everything so we delegate. Sometime it’s hard to juggle everything, but in the last few years with the Internet and email it has made it a lot easier to keep in touch with people no matter where you are in the World.

CH: You always have very unique skating routines that always have some sort of ‘gimmick’ that gets the audiences excited. How do you come up with such great ideas?

F&A: We put a lot of thought into how we can try to connect with the audience. We discuss ideas for months and try to consider a wide range of possibilities. Sometimes what we actually joke about or think might be too over the top actually works the best.

CH: Where do you want to take your career from here?

F&A: Our dream is to take our acro/ice show that we produced for Sea World for 8 years to the next level. Extend the show to at least a 90 minute production and have it play in a venue in Las Vegas or some other place in the world. Our company Glacier I.C.E., inc., is always looking for new corporate, industrial and theme park clients who want a show that contains ice skating as part of their entertainment.

CH: What is your most well known routine and how did it come about?

F&A: We would have to say there are really 2 numbers that people seem to always ask about. Our Enigma number and our 1492 number. We where living in Italy for a while when the idea of using masks came to us and skating music to from the group Enigma. Anita had seen some of Brian Wright’s work and thought he should be the one to help us with the piece. So that year we approached Brain at the US Nationals and he agreed to help us put together the piece. The other piece came about when a friend suggested a piece of music from the film 1492 “Conquest of Paradise.” He thought this would be a great piece for a pair to skate to. After listening to the piece we agreed and thought about if for many months. We decided early on that Frank would play the part of Christopher Columbus — but we really did not know what to do with Anita. Then one night while discussing the piece with Brian — Anita thought of possibly being ship itself — at moment we all knew we where on to something and then the idea of mast and the sail came very quickly. The problem then became how to make all of this work within the number itself. The costume design took much thought, and research as well as practice.

CH: Where can we see you perform in the near future?

CH: Most people have their own time to work during the day and then they see each other at night and on weekends. Your situation is a bit unconventional since you are together 99% of the time. You are a great “team” together on and off the ice. Is it hard to live, work and play together all the time?

F&A: We feel very lucky to have managed to work this out so well. We learned early on that each person needs to be in charge of something and to work as a true partnership. Frank handles contracts, paperwork, accounting, and so on — while Anita handles choreography, music, and casting.

CH: What is your secret to success in the entertainment business?

F&A: You have to enjoy what it is you do and be committed to the best job possible. Like most other businesses you have to try to find you niche and put out the best possible product.

CH: You have done so many different skating events in your career. What event stands out as the most “fun” of them all?

F& A: One of the most fun events we did was “Too Hot To Skate” held on top of the fountains at Caesar’s Palace in Las Vegas.

CH: Thank you Frank and Anita. I have always enjoyed your performances and have been honored to work with you on and off the ice. I wish you every success with all of your future endeavors.