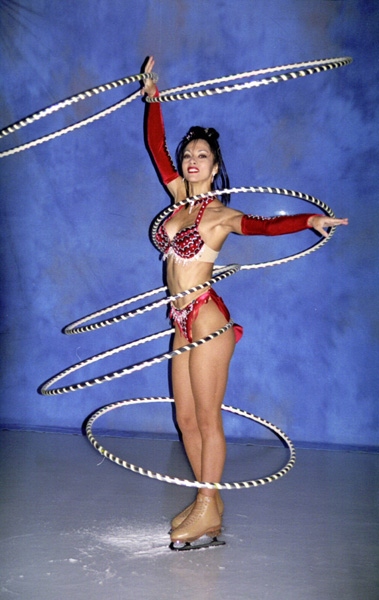 Irina Grigorian is a one woman show who brings down the house wherever she performs. Whether she is performing on skates, rollerblades, or in shoes, Irina brings her amazing hula-hoop routine to a new and higher level every night. She has performed all over the world but makes her home in Las Vegas. I have had the honor to work with her several times over the past decade and now it is an honor to interview her.

CH: Hello Irina. I am excited to interview you as I have many questions to ask. First of all, how long have you been skating with hula-hoops?

IG: I started to practice with hoops 12 yeas ago when I was touring with the Holiday on ice production of “Carmen.”

CH: What inspired you to start skating with hula-hoops?

IG: All my life I was fascinated by circus art and I was dreaming one day to incorporate that with my biggest passion of ice skating. After many years of practice I was able to do so.

CH: Have you always wanted to live in the United States? What made you choose Las Vegas?

IG: When I was touring with Holiday on Ice (in Europe) my husband and I took a vacation trip to the US, we visited the Grand Canyon, Phoenix, LA, San Diego and Las Vegas. I absolutely fell in love with the US and with American people. The following year we signed a contract with the Ice Capades and were trilled to start touring in US. We decided to live in Las Vegas because we are both entertainers and Las Vegas is the world capital of entertainment.

CH: Will you explain to our readers how you have created success for yourself in the US? I mean, you came here many years ago to skate with the Ice Capades and now you are touring with Tom Collins Champions on Ice. That is a huge step up!

IG: I created a skating hula-hoop act to improve my chances of skating long into my lifetime. I thought that eventually I wouldn’t look good as skater, so I transformed myself. In 2002 I did my first tour with Champions on Ice and performed with some of the greatest figure skaters of the world and that will be my most memorable skating achievement for the rest of my life.

CH: What other kind of performances do you do besides skating?

IG: I did little bit of dancing at “Enter the Night”(Stardust) and Splash (Riviera). I also used to perform my act on inline roller blades.

CH: Do you work in Las Vegas or do you usually just travel to work?

IG: Both. Right now I am performing at Splash at Riviera, but after I will have few guest appearances on cruise ships and will tour with Champions on ice again.

CH: I have worked with you several times over the past decade and I am constantly inspired by your work ethic and your humor. What do you think are the keys to success in this business?

IG: I think in any business the key to success is positive thinking and hard work. In “show business” a nice smile is very important, a real one. I have never seen a bigger smile than yours Craig, one that is so genuine it graces your face.

CH: Wow! Thanks for the wonderful compliment. I feel the same way about you. I know that you have performed on Cruise ships and also topless. Will you please describe some of the craziest jobs that you have done?

IG: A Long time ago I worked in Spain at the Scala theater; I had to start my number inside of the Black Panther cage, lying down in a hidden compartment. The Audience could see only the panther and after I would appear (like a magic trick) and get out of cage and start to skate. The Craziest part of that experience was that they built the hidden compartment in the cage without seeing me-and presuming I’m small like most of the other skaters are. So, every night, it took few crew people to pack my 5’10” body (plus skates) in that small place. Another very different job I use to have was when I worked at Mandalay bay with exotic birds for Tiana Carol and Clint Carvalho, this one was my favorite I loved it very much.

CH: What was it like for you when you first came to the US?

IG: It wasn’t easy at first. We came to the US with only a pair of skates and we worked very hard to build our life from scratch.

CH: One last question. What would you say to our readers to inspire them to pursue a life in show business?

IG: It is really a joy being out in front of people doing what you do best and to be able to express yourself! Good luck for everybody!

CH: Thank you Irina. I have really enjoyed interviewing you. You are such an inspiration and also such a fun and positive person to know. Good Luck with all of your future career opportunities and keep that beautiful smile!