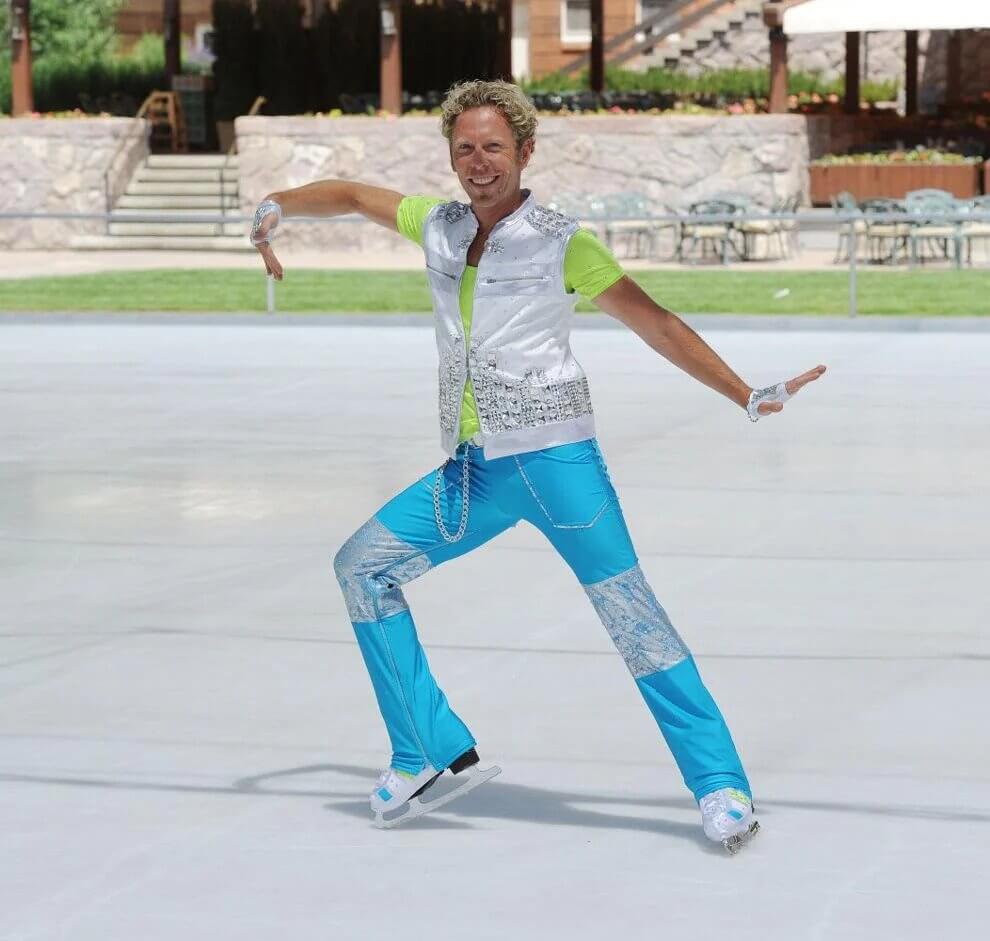 Hamming it up, Craig Heath does his best Justin Bieber impression two summers ago at Sun Valley Outdoor Ice Rink. Heath is well known for his spinning abilities.

Sun Valley on Ice solo performer and ensemble skater Craig Heath is the perfect example of someone who loves what he’s doing and an athlete determined to extract every bit of magic from his career.

Heath, 47, has been coming to Sun Valley every summer for 19 years to perform in summer ice shows and to teach skating at the rink. He calls his experience at Sun Valley “the highlight of my life.”

And that’s a long life in the skating world. Heath said, “I don’t think I’m the most talented skater, but overall I’m a good performer, consistent and try to be the hardest worker.

“I don’t have to do triple axels any more, but I’ve found that it’s all about the entertaining. I’m kind of shy in person. I’m much different in front of an audience for a show.”

Hailing from Mill Valley in the Bay Area of California, Heath started skating at nine in the Corte Madera rink in that area and competed very successfully from the age of 10 until he was 26.

He was the last U.S. senior championship skater to win compulsory figures, in 1991. He twice won world professional bronze medals. He is famous for completing 10 double axels in a row for performances of Disney’s “Toy Story on Ice.”

Heath can pinpoint just when he discovered that professional show skating was his calling. “My first show, at Busch Gardens in Williamsburg (Va.). Small ice surface. But after that first show, I realized this is why I was skating.

“I loved the backstage, the getting ready, the working with other people, the solo and group skating. I was hooked.”

He remembers coming off the ice while still competing as an eligible skater in Los Angeles and being greeted by former Sun Valley Ice Show producer Rainer Kolb and Gia Guddat.

“Rainer gave me a business card and asked me to come to Sun Valley,” said Heath. That was 19 years ago. Now, he spends eight months each year in Hong Kong, three months in Sun Valley and several weeks chilling out in the Bay Area.

In Hong Kong, he teaches and performs for Swire Properties, Mapletree Investments and also for the Hong Kong Skating Union. He loves the area for its international flavor and mix of people. “Hong Kong is really happening,” he said.

What he doesn’t particularly enjoy about Hong Kong is getting off the rink at 11:30 p.m. after a full day of teaching. “Not the easiest work,” he said. It’s much more relaxing at Sun Valley, where his work day is shorter allowing Heath to hike and relax in the mountains.

“I love hiking. I love going to Redfish, even to Twin Falls. I love being outside and riding my bike,” said Heath.

Staying in shape for such an athletic pursuit as figure skating at age 47, turning to 48 on Aug. 1, is a matter of much more than the positive attitude for which Heath is known.

He said, “I eat 98% vegan, go to the gym and have a trainer here and in Hong Kong. I stretch every night and do my own form of yoga. And I’m not a big party guy. I think the way I eat is the big thing.”

Heath said he is enjoying this year’s group of ensemble skaters choreographed by Stephanee Grosscup. He said, “It’s a really, really good group of core skaters, the strongest in a while here. It’s so nice to perform with such great skaters.”

For the first ice show July 4, Heath’s solo was a Rhinestone Cowboy selection to the “Timber” music. Adapting line dancing in their number, he was joined by four female skaters. It was fun. And he credits Guddat for helping him with the creative part of the piece.

“She will pick all the music. The four girls were her idea. Costumes were mine,” he said.

On the ice show of Saturday, July 18, Heath debuts his other solo, a childlike “Happy” number featuring four different songs with “a big surprise in the middle,” he said.

Heath knows from years of experience that you’ve got to keep it fresh to keep the audiences coming back for more.