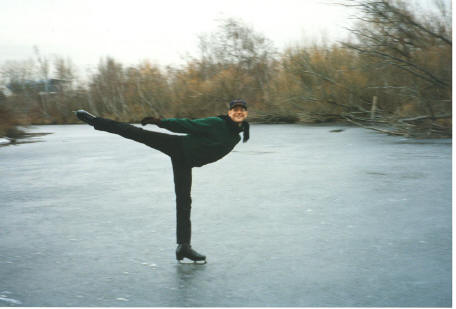 Brian Wright was an inspiration to everyone who knew him. He had friends far and wide. Last summer, after his passing, Brian’s family had a Life Celebration to honor his life and to celebrate all that was Brian. The beautiful event was held in Seattle where Brian lived for most of his life and where he always called “home” no matter what suitcase he was living out of at the time. At the event, people spoke of all the good things….and especially about all of the FUNNY things that Brain did during his life. We watched video’s of him at the ice rink creating some of the skating world’s all time most interesting and artistically choreographed routines and we watched how serious yet funny he was while doing it.

People read poems and recited letters from Brian and we all had a great time TOGETHER.

Brian created 6 routines for me that I will cherish for the rest of my life. I still have one that we did the summer before his death that I have not performed yet. I will when I am ready.

I knew that I had to work with Brian when I watched a routine that he created for Jeri Campbell called “Primitive.” It was (and is) one of the most beautiful pieces that I had ever seen. I can watch Jeri perform it a million times over.

Brian gave me so many gifts during the years that we worked together. He was such an amazing mentor to me. There is so much more to be said…but most of all….THANK YOU Brian for EVERYTHING you were and are. I will never forget you….ever.

« Life on the Road
Memories of Brian Wright »