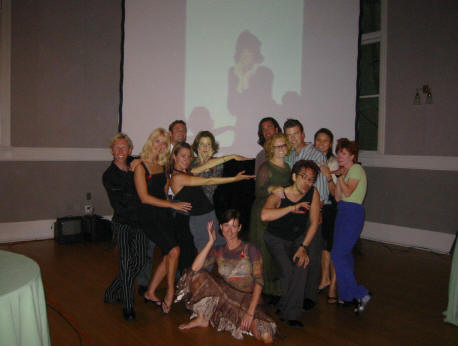 Brian Wright touched the lives of so many people with his compassion, courage and
humor. Some might call him a genius. I certainly would. He was an inspiration to
many people, including me. Last summer I spent a week in Sun Valley, Idaho with
Brian. I flew him there to choreograph two new routines for me and also to just
visit and have fun. We accomplished all of that and more. Not only did I end up
with two of my best routines to date, but Brian and I had many, many laughs
together. Brian wrote an article about his experience last summer that was
featured in two previous PFSC Newsletters. He had many realizations during his
week in Sun Valley and he wanted to share it with everyone. That is pure “Brian.”
He was always thinking of others, even in the midst of his pain and suffering.
Stephanee Grosscup, his “wife,” spoke with him a few months ago and she
promised him that he would leave this planet laughing. That was her promise to
him. So, on the eve of his death, she called many of his friends and told us to
think about funny Brian Wright stories so that he could feel our laughter from his
coma. I have so many funny stories of Brian that made me laugh all day long. I
want to share a few so that you can laugh too. I am sure he would appreciate it.

My Brian Wright memories will live forever. I think of him every time I skate as he gave my skating a whole new dimension. I will be performing “Brian Wright” numbers for the rest of my career. I am honored to have known him and even more to have worked with him.

Brian inspires us all to keep professional skating alive. His beautiful and intricate routines will live forever in our hearts.