Holiday on Ice – Alive and kicking 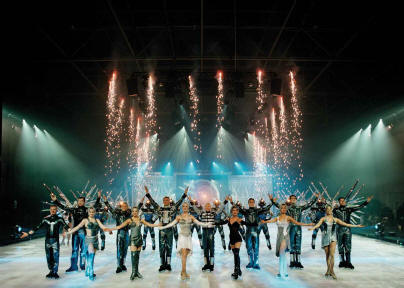 Holiday on Ice, which started in 1943 in Toledo, Ohio is still very much alive and thriving in Europe and many other countries around the globe. This year celebrates the 60th anniversary of the spectacular ice revue that currently has 4 different productions touring Europe and Mexico.

Holiday on Ice embodies all the glitz and glamour of Vegas and the elegance of Hollywood. The touring shows are not only fantastic for the audience, but also for the skaters. The shows are all about ice-skating and extreme production. Up to 50 skaters might be on the ice at one time, doing intricate choreography, highly technical jumps and spins, and performing to millions of happy fans.

Sonia Henie, one of the most famous skaters of all time, starred in the show and helped to make Holiday on Ice a household name. Since then, many skating stars has graced the frozen surface and brought the shows to life. Dick Button, Toller Cranston, Allen Schramm, Denise Biellmann, Robin Cousins, Katarina Witt, Surya Bonaly, and Philippe Candeloro, just to name a few.

The shows are like watching a Broadway musical but with the added element of ice, which brings speed and power- a whole new dimension. The success of one of the newest productions “Holiday on Ice-Hollywood” is based on the fact that Holiday on Ice was able to contract two top notch creative minds for the project: the famous director Anthony van Laast, (Mama Mia) known for his work with Andrew Lloyd Webber and also the choreographer and Olympic gold medal figure skater Robin Cousins. The show is dynamic, inspiring and exciting to watch. The audiences are in a frenzy by the finale, where girls in futuristic wings that light up, grace the ice. “Diamonds”, the newest production was choreographed and co-directed by Emmy Award winner Sarah Kawahara who is fresh from staging the opening and closing ceremonies for the Olympic Games in Salt Lake City.

Though Holiday on Ice is not currently touring in the US, the success around the world is phenomenal. For a professional figure skater, Holiday on Ice is a first class ticket. The audiences actually dress up to come see the show! This is something that I have been missing as a pro skater. My first performance with the show came as a big surprise when I saw so many people in suits and dresses. Even the skaters dress up to come to work. I almost feel like I have gone back in time to an era where elegance was expected.

Today 60 years of Holiday on Ice can look back on more than 90,000 performances, in 650 cities, in more than 85 countries and most recently, the 300 millionth visitor- a unique record in the world of entertainment! I look forward to celebrating many more years of one of the greatest shows in history. Happy 60th Holiday on Ice!

« Ice Skating on a cruise ship?
Breaking in New Skates? »