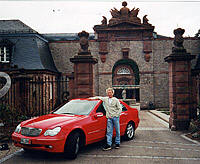 “I always challenge myself,” says Craig Heath. “I pretty much work all year-round. There’s never been a time I’ve had more than two weeks off for the last six or seven years.”

Even to die-hard skating fans, Heath is not a household name. He competed at the U.S. National Championships and on the U.S. international team for several years, but he never stood on the podium. Yet at a time when even skaters with World medals complain about the lack of professional opportunities, how does he keep so busy?

“People are afraid of traveling so much,” theorizes Heath, 34, who is in his sixth season on the road with Walt Disney’s World on Ice Toy Story. “Once you get into the rhythm of traveling with a show like Holiday on Ice or Disney on Ice, where you’re traveling constantly for a long time, it’s really fun. We’re not just in a city for a night. We’re in a city for a week, sometimes two weeks, sometimes three. We get to relax.

“You get to have different experiences all the time,” he continues. “It’s pretty incredible to say, ‘Oh, I’m in Paris for two weeks.’ ”

This year’s Toy Story tour has Heath crossing Europe to portray the dual roles of good-guy Andy and bad-guy Sid. From September through April, he showed off his skills in England, France, the Netherlands, Sweden, Norway, Finland, Germany, Belgium and Ireland. In each city, he follows a similar routine.

“Right when we get into the city, I like to unpack for half an hour. Then I like to get out of the room and check out the whole city and see what’s going on,” he says. “I like to find out where the laundry is and where the grocery store is. Then I start going sightseeing.”

The location of the grocery store is particularly important to Heath, who maintains a strict vegan lifestyle — no meat or animal products whatsoever.

“In Europe, it’s really easy,” he notes. “For example, in Helsinki I went to the local grocery store across the street from the hotel and they have tofu, soy milk, rice milk, soy yogurt and other things that I love. It’s been like that in every city. They even had veggie burgers in the restaurant at Hartwall Arena.”

The show also transports a trunk for him with food supplies.

Also crucial in Heath’s luggage is his little office. He was recently re-elected for his second term as president of the Professional Figure Skaters Cooperative (PFSC). To show his support, he flew to Philadelphia last December to compete at the American Open. All the more significant, as he had just performed a six-pack (three shows each for two days) and returned to the tour just in time for another six-pack.

“I always feel so much better after I’ve competed, because I really like to be myself,” says Heath, who also continues to challenge his technical levels (including triple jumps), even when performing in character. “Competing keeps me working on new things when I work on programs. “

On a practical level, PFSC business keeps him busy constantly. “I’m on my computer doing some sort of PFSC work before the show, during all my breaks of the show and after the show,” he says. “Then I go into the production office and send all my e-mails off and get another bunch to work on.”

Once this year’s Toy Story concluded, Heath headed home to Northern California for a few weeks before heading to Sun Valley, Idaho, where he spends each summer performing and teaching.

By that time, he may be ready to take on more choreography projects. In the summer of 2000, he assisted Barry Lather in staging two other Disney on Ice shows.

Then it might be time to write his book. “I’ll call it Life of a Skating Gypsy.”