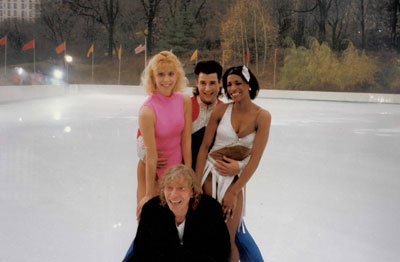 The skating world has lost a remarkable talent on January 10, when two-time World medalist Christopher Bowman passed away at the young age of 40. Funeral services were held Thursday, Jan. 17 in Los Angeles where he grew up. The two-time U.S. champion and two-time Olympian who was most commonly known as “Bowman the Showman” for his flamboyant skating style, was found in a motel room in the North Hills section of Los Angeles.

Bowman’s accomplishments include winning the 1989 and 1992 U.S. titles as well as capturing the silver and bronze medals at the 1989 and 1990 World Championships, respectively. In addition, Bowman finished seventh at the 1988 Olympic Winter Games and fourth at the Olympics in 1992. He also toured with Tom Collins “Champions on Ice” and was a star of the Ice Capades.

I was fortunate enough to have trained with Chris as a teenager. He was the most talented skater that I have ever known. The way he could relate to the audience was unprecedented at that time and still holds true today. One of his former coaches, Ellen Burka, who trained Chris after his longtime coach of eighteen years, Frank Carroll, said it best. “He was a fabulous skater; he could do incredible things,” she said. “But he had days when it was impossible to train him. Still, under pressure, he could do things he would never do in practice. I asked him about that once; he told me, ‘I suck the energy out of the audience and into my body, and I use it.’ And that was true.” Chris did have an amazing way of doing this. I was constantly amazed (as was everyone else I’m sure) at how he could goof around all the time while training but then do a perfectly clean program during his lessons with Frank.

One of the strongest Chris Bowman memories I have is how he always made friends so easily at the rink or wherever he went. He was always joking around with everyone , from janitors to managers. Everyone was drawn to him. You could not help but to like the guy. I know he drove his parents and coaches crazy but that is because he was so incredibly talented and they wanted him to be his best. He just wanted to play.

One very classic Chris moment happened at Pasadena Ice Rink in the late 80’s. We would always compete to see who had the best figures. One day Chris came over to me and was trying to convince me that his figure was better, but he was really trying to get me to bend down and check out the tracings. I should have known better. As soon as I bent forward, he pulled my pants down around my ankles and the entire rink was laughing. All I could do was stand there and laugh too. That was typical behavior and things like this happened often. I do have to say that it made the day go by faster having him around. He was the most colorful and vibrant person that I had ever met. He had such great energy and was extremely funny with quick wit. He could command an audience in any situation he was in.

I was driving Chris around one night and we were behind a car that was going really slow. Chris yelled out, “snake ’em dude”! Not knowing what that meant, I put on my blinker and politely went around the car. We laughed about that for years. He’s probably still laughing about it.

I attended the funeral service in Los Angeles. Chris packed a full house in the Church and also at the reception that was held in Studio City directly after the service. Frank Carroll spoke wonderful words about his most talented student of Eighteen years. He reflected on some of the funniest moments he had teaching Chris throughout the years. We were all laughing. At the end of his tribute, he said, “I will miss him so much…you have no idea.” It was a truly moving moment. Linda Frattianne spoke after Frank. She trained with Chris since he was five years old. Tears were flowing. His ex-wife Annette Bowman , daughter Bianca, Joyce his mother and Nelson his father were all there for the sad occasion. Many faces from the skating world, past and present were there as well. It really was a beautiful tribute to an amazing talent.

Reflections from around the skating world….

On the ice, in his prime, “he was a show stopper,” remembers skating champ Scott Hamilton. “Chris had a bad-boy quality like the Will Farrell character in Blades of Glory; the same shameless flaunting,” adds Hamilton. “But Chris wasn’t unhappy, egotistical or angry. He never uttered a bad word about anyone.”

John Nicks, former coach: “Christopher Bowman was one of the most talented and entertaining skaters that I ever worked with.”

Frank Carroll, former coach: “He was truly a unique, wonderful, witty and intelligent human being. He was the most talented skater that I ever taught.”

U.S. Figure Skating senior director of athlete high performance Mitch Moyer: “‘Bowman the Showman’ says it all. When I think of Christopher, I smile. I think of all the Christopher Bowman stories and performances. He loved to be on stage both on and off the ice … and then I frown. It is sad that he struggled with balancing his life and that he passed away so young. Christopher touched so many lives and put smiles on all our faces.”

1988 Olympic champion Brian Boitano to the Chicago Tribune: “If I had to pick the three most talented skaters of all time, I would pick Christopher as one. He had natural charisma, natural athleticism. He could turn on a crowd in a matter of seconds, and he always seemed so relaxed about it.”

1993 U.S. champion Nancy Kerrigan: “Christopher was one of the most entertaining skaters I have ever seen. He understood better than most how to capture the crowd. I know my parents were huge fans of his because they loved how he could communicate with the audience. I will never forget spending time with Christopher at the 1992 Olympics. We had a lot of fun. He will be missed.”

Joyce Bowman, his mother: “He thought he was put on this earth to have a good time.”

I highly recommend watching Chris skate. Go to www.youtube.com and search for Chris Bowman Figure Skater. There are many wonderful video’s of him. I spent hours watching him as a personal Chris Bowman tribute that I had after his death. I will always remember him fondly and he will be truly missed.