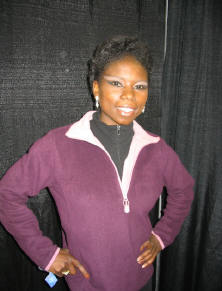 You may know Surya Bonaly as the French girl with the backflip, but did you know she is now an American citizen and lives in Vegas? At age 30, Surya has captivated the world with her athletic style and her originality on the ice. Some of her many credits include being a 3-time World Silver Medalist, 9-time French champion and 5-time European champion. In the first season of the hit series “Will and Grace,” Surya was elevated into American pop culture when all of the characters of the show went to see the Tom Collins “Champions on Ice” show, where Surya was performing. “Grace” was infatuated with Surya and couldn’t wait to see her do her backflip. She also commented on Surya’s blue eyeshadow.

When I asked Surya what she thought about being on the show, she replied: “It was very funny. They could have picked someone else, but they picked me. I kept cracking up about the blue eyeshadow joke. I used to wear blue eye shadow to match a particular skating dress a long time ago. I loved the episode. It was very funny.”

Surya started skating when she was one and a half years old along with doing gymnastics. Her mother was a sports teacher and volunteered in a sports club so it was like kindergarten for her. When she was 12, she was on the National team for both skating and gymnastics, and at 16 she decided to focus solely on skating. Her gymnastics skills helped her to transform women’s figure skating into a more athletic sport. She is the only person to do the “Bonaly Backflip,” which requires her to split her legs in the air and land on one foot.

Surya has also had her fair share of hardship when she not only snapped her Achilles tendon once, but she later snapped the other one. 10 months off the ice both times was hard for the overachieving skater. Her recovery has been difficult but being a true champion, Surya has bounced back to performing at a very high level. She also teaches skating in Las Vegas as well as Lake Arrowhead, CA, where she owns a second home. Teaching skating has become another passion that she wants people to know about. “I wish that I could be more involved in the Vegas skating community,” she commented. “Not just because I live there but because of what I have to offer the young skaters. I hope to use my knowledge as a high level athlete and performer to inspire the skaters in Vegas. Most people don’t know that I teach, as they think I am just practicing for upcoming performances.”

This Fourth of July was her first as an American citizen and she is very proud to live not only in the U.S., but also in Las Vegas. “I think more American now,” she said. “I feel like a foreigner when I go back to France. I don’t know about anything that is going on there–I just speak French.”

When I asked her how she chose Vegas as her home, she replied, “I was training in other U.S. cities, but then I went to Vegas to practice and I loved the weather so I started looking for a home right away.”

One very funny Surya moment occurred when she landed her first quad toe loop in competition and then proceeded to fall on her stomach and slide forward. “I was so excited,” she exclaimed, “and I raised my arms up to say ‘yippee’, then I tripped and landed on my tummy and said ‘oops’ but I got up and did not miss a beat of the music.”