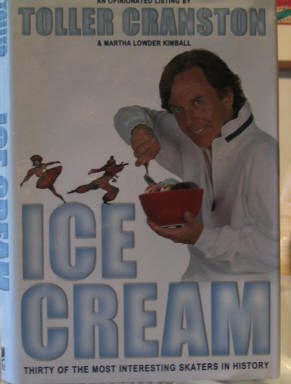 Toller Cranston is a Canadian figure skating legend and a true original. He was six-time Canadian men’s skating champion and winner of the bronze medal at the 1976 Winter Olympic Games. He is also a visual artist of international repute and has shows all over the world. I have worked with Toller on several occasions and have to say that he is one of a kind. In his latest book, Ice Cream, he displays his flamboyant personality and his outspoken opinions to the highest degree.

The skaters included in the twenty-five chapters in this book all made a noticeable impact on the skating world, but most importantly, in the world of Toller Cranston. The skating world has many outspoken characters within it’s perimeters, but none so infamous as Toller. He has the ability to be honest in the face of severe penalty. This book is a true example of this.

Just as the title implies, these are thirty of the most “interesting” skaters (according to Toller) in history. This does not necessarily mean that these skaters are well liked. To give and example, he listed Tonia Harding, who he gave the chapter title “A New Low for Figure Skating.” He describes her as “an unusual specimen within the ladies’ ranks” due to her “physical strength and athleticism of a male.” He goes on to say, “she sounded like a brainwashed cult victim” during interviews before the Lillehammer Olympics.

In Dorothy Hamill’s chapter, entitled “Eyes Wide Shut” Toller talks about Dorothy’s bad choice of men and business practices, but he definitely praises her in the following statement, “her star has twinkled above the skating world for several decades…she has given more pleasure and love to the American public than practically any other skater I can name.”

This book is honest to the point of cruelty (in some cases), but definitely a must read for skaters and fans alike. Sometimes I found myself laughing out loud, and other times I was diving for cover. All facts aside, I learned a great deal about Thirty of figure skatings most notable celebrities and I gained a new appreciation for the fascinating mind of Toller Cranston. In the words of his co-author Martha Lowder Kimball, “Take your blood-pressure medicine, and begin reading.” I heartily agree.