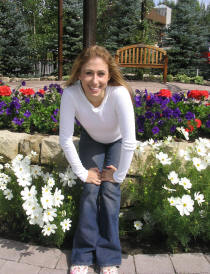 At age twenty-five, Amber Corwin is sitting on top of the world and living the American life to the hilt. Residing in the sunny town of Hermosa Beach, California, Amber has accomplished more than most skaters her age. She is the current ISU Four Continents bronze medalist, a current 2004 US National medalist, and has competed in a multitude of international events all over the globe. After eleven years on the US National team and eight years on the US international team, the bright eyed skater trains in her sport just about everyday of the year and is also about to graduate from California State University of Long Beach with a degree in fashion merchandising and business marketing.

Just recently, Amber was invited to perform in Tom Collins Champions on ice tour in her home area of Los Angeles, California. I asked her how it felt to perform in one of the most prestigious skating shows in the world, ” I was extremely nervous because skating in that show has been a dream of mine since I started skating” she said. ” In my eyes it was like seeing a lifelong fantasy come into fruition. I was able to ‘keep my cool’ because of the family like atmosphere backstage between the cast and crew along with all of my friends and family in the audience supporting me and cheering me on,” she continued.

At a time when ice skaters seem to be getting younger and younger, Amber’s age of twenty-five is now considered on the higher side of the age scale. “I feel that with age comes wisdom,” she commented. “I feel that I can use my life experiences in a positive way and incorporate them into my choreography and expression. I am not putting on an act- I am showing real emotions and expressions in my skating. With my age I can add a class and sophistication that can only come through years of experience,” she explained.

Every skater has a “most embarrassing” moment and of course I had to ask Amber what hers was. “Dick Button said on National television that my layback spin looked like a dog’s leg straddling a fire hydrant!”, she exclaimed. Then she went on to say, “that definitely pushed me to improve my position.”

Multitasking is just the day in the life of this California girl. Along with training, school responsibilities and traveling, Amber is one of only three North American delegates to the International Skating Union (ISU). This means that she is an ambassador between athletes, officials and council members. ” I express the athlete’s opinions of our sport to the ISU officers. We meet two times a year for discussions,” she said. ” I was also just named the athlete on the ISU technical committee so that I can help to decide the rules for competitions,” she continued.

After her skating career which she hopes will lead her to compete in the 2006 winter Olympics and then a professional career on a skating tour, Amber wants to be a stylist for different films and fashion magazine photo shoots. She also hopes to open her own image consulting business.

I asked Amber to describe her perfect day in detail. She went on to say,” my perfect day would be to wake up at my beach house, walking to Pilates class while drinking a double tall, nonfat, extra hot latte with two raw sugars from Starbucks, listening to Sting, followed by a game of beach volleyball, lunch at an outside cafe with friends, a sushi dinner, going to a Madonna concert in the evening and finally sitting in a nice, quaint martini lounge with Diana Krall playing in the background.” That sounds like the perfect American life, and a little piece of heaven.