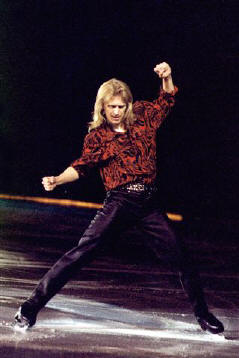 At the 1984 Olympics, Jozef Sabovcik showed the world that he was in the highest echelon of figure skating’s elite by capturing the Bronze medal in the men’s event. That was just the beginning for this extremely talented young man who has performed all over the world, captivating audiences with his remarkable jumping ability and rock star charisma. I have had the great fortune to skate with Jozef many times over the past eight years and I am still amazed when I watch him jump. His close competitor, Scott Hamilton even gave Jozef the nickname “Jumpin’ Joe” when he was commentating an event many years ago.

At the age of six, Jozef’s grandmother took him skating at a public session in his native country of Slovakia. “My parents didn’t even know that I was skating for two weeks,” he said. Born into a family of prima ballerinas, Jozef quickly mastered the jumps and spins that would one day make him famous.

Now at the age of forty, Jozef is still on top of his game. “I don’t feel forty. I don’t approach it in that way,” he said. ” My generation of skaters are all about the same age and are still skating. It is a state of mind,” he continued. To prove to himself that he can still skate better than ever, he goes to the ice rink and lands a quadruple toe loop jump every year on his birthday.

Bruce Springstein has been a tremendous inspiration to Jozef for many years. He often skates to songs by the popular artist and has even met Bruce in person. “I skated to the Bruce Sprinstein song ‘Trapped’ in a competition and it was the first song that kind of marked the way I was going to skate,” he said. That was the first time that he skated in Jeans and a T-shirt and got 10’s for his performance. Needless to say that this style has stuck with him and become one of his trademarks.

I asked the greatest jumper in the world what he thinks of when his is doing a jump. “I think about the feeling that I have in the jump and technical things,” he said. ” The entire jump takes little over half a second and you can only think of one thing during that time. Once you land a jump for the first time, your body totally knows how to do it. It is just your head that messes you up.”

Not a competitive person by nature, Jozef continues to push the envelope of skating. He performs a layout backflip that is outstanding in height and beauty. “I’m inner motivated. I like to do things for myself,” he said. ” I am competitive with myself. I never liked competitions. I want to prove to myself that I can still do it just for myself.”

When asked how he stays in shape, Jozef said with a chuckle, “I honestly don’t know. I only skate about forty-five minutes a day, five times a week and I don’t work out. I simply maintain what I already have!”

Family life is the most important thing to Jozef. He has a wife, Jennifer who he met nine years ago in Sun Valley, Idaho where he performs every summer, and two son’s, Blade (12) and Jozef (1). They now reside in Bountiful, Utah where he teaches skating and trains for upcoming performances all around the world.