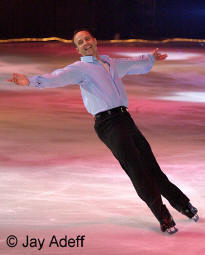 Brian Boitano is not only a National, World, Olympic and Professional Champion, but he is also a creative force in the sport of Figure Skating. I had the great pleasure of talking with him about his life, the Olympics, and Pro Skating.

Craig Heath: Your work ethic is unparalleled. Have you been that way since you were a child, or did you grow into it?

Brian Boitano: I was always first on the ice and last off from the very beginning. At the end of every session they used to honk the Zamboni at me to get me off the ice when I was little.

CH: I remember you telling me how your Olympic Gold medal performance felt to you. I will never forget what you said. Would you mind sharing it with our readers?

BB: I was totally in the zone and I knew nothing could take me out of that place if I focused on staying there. That was the challenge. Before the music even started I noticed golden gates coming up slowly on the ice. They were positioned like grids. I knew that they were there to remind me to stay in the moment. As I went through one gate(jumps) I could then think of the next. That is only one of the many things that I remember about those 4 1/2 minutes. Another thing that still amazes me is that if you ask me to this day what I was thinking at any moment during that program, I could tell you exactly and in great detail. It is branded in my memory. I felt so much divine help that night. It was so profound and life altering.

CH: You are one of the most consistent performers that I have ever known. How do you maintain such quality and consistency all the time?

Linda Leaver (Brian’s Coach/Manager): By being a pain in the ass perfectionist and practicing all the time.

BB: I think that consistency is based on good technique and good conditioning.

CH: You were elevated into pop culture when the makers of South Park used your likeness in their South Park movie. You were the only character that was portrayed in a positive way in the movie. How did you feel about them using you?

BB: At first I was nervous, and then I was flattered.

CH: Usually, in the skating world, skaters tend to change coaches from time to time during their career. You and your coach Linda Leaver have not only been working together since you were a child, but you are still together after all these years. That is almost unheard of. How have you maintained such a great relationship?

BB: I would quit, but I can’t get a word in edgewise.

CH: Who are your role models?

BB: Terry Kubicka was my role model. He was such a great skater. I am still in awe of him.

CH: Professional skating has taken beating over the last few years, but I still think that this is just a phase and that pro skating will flourish in the future. How do you feel about this topic?

BB: I think it may take a long time, because the feeder for the pros (the amateur world) has tried to kill pro skating off and in the process has killed themselves off. We need some visionary leaders in both the amateur and pro world.

CH: I know that you just turned 40, but you are still as fit as ever. You have really changed our sport by winning an Olympic gold medal and then maintaining your high level of skating. Before you, skaters used to lower their level once they started doing shows. What made you continue to push the limits in the sport?

BB: I wasn’t ready to turn pro in 1988 because I felt I had so much more in me to develop both technically and artistically…so when I made the decision to turn pro, I also decided to try to accomplish those same goals in the pro world.

CH: Besides skating, you have other projects in the works, and your own company. Please tell us about some of your projects.

BB: White Canvas, my production company, has its 8th Skating Spectacular scheduled to air on January 1 on NBC with special musical guest LeAnn Rimes. In addition, I will be skating in a tribute to Andrea Bocelli in November, also to be aired on NBC. I have a number of preproduction irons in the fire, but these projects often take a long time TO COME TO FRUITION. The Andrea Bocelli project was three years in the making.

CH: What are your future plans?

BB: Who knows? I’m taking each year one at a time.

CH: Thank you Brian, not only for doing this interview, but for all that you have given to pro skating. You are an incredible person and inspiration!