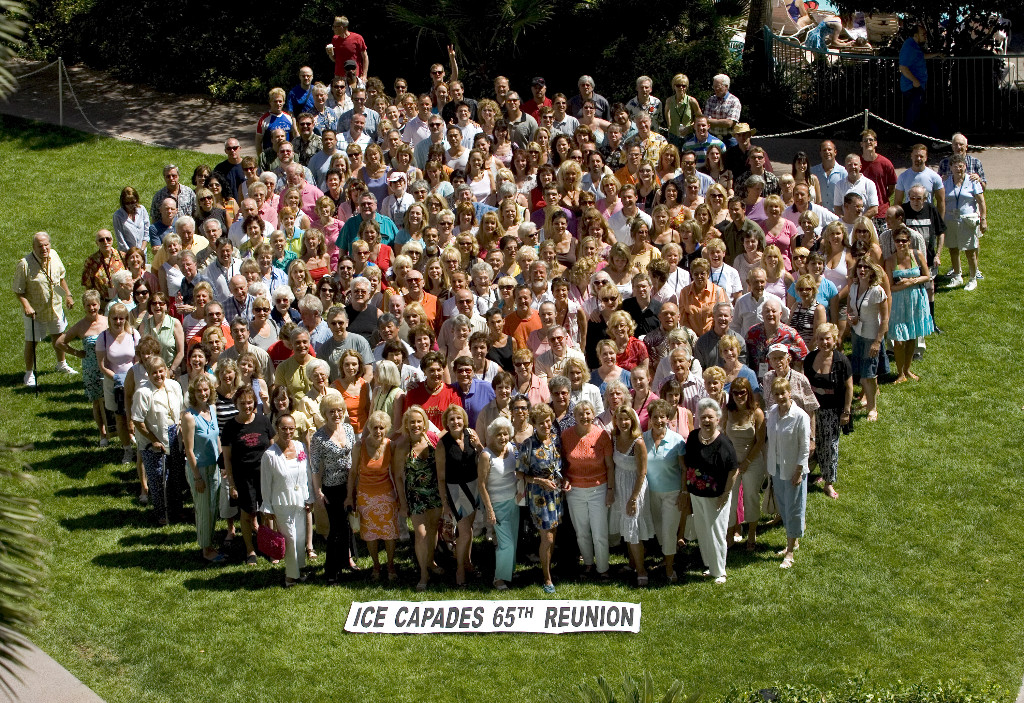 The Ice Capades 65th Anniversary Reunion was held in Las Vegas June 12 and 13 at the Flamingo hotel and casino. Over 525 guests from every era of the show attended for the two days of celebrations. I have to admit that there was not very much sleeping going on during the reunion. Who had time to sleep with all of the socializing we had to do? I spoke with Paula Trujillo, a member of the organizing committee, who reluctantly admitted, “I was so social for four days, that I needed another four days to recover!”

Ice Capades started in 1940 and toured successfully until the late 90’s. Fifty-five years of tours created hundreds and thousands of friendships and relationships that will last a lifetime. Not only skaters, but crew, office staff, promotion teams, and others involved were all placed together and brought “on the road” for months at a time. For many, this was the first time away from home and as Slylvia Froescher, who was another member of the organizing committee, put it, “I always considered that time my ‘college’ years. It was my ‘school of life’. The friendships that you make when you are on a touring show like Ice Capades are very important as is keeping those people a part of your life forever.” For this reason, people like Sylvia and Paula along with Kelli Walters and Noel Watson, worked tirelessly to make the reunion a success. Their preparation started many months beforehand as a gathering of that magnitude and with so many ‘diva’s’ in attendance requires almost endless planning.

Why did the Ice Capades die? I think there were many contributing factors. Willy Bietak, who produced the show for five years, from 1986-1990, said “It was terrible when it stopped touring. Variety television went away for a while and then came back and that is my hope for the variety ice shows like Capades.” He went on to say, “Americans are so used to seeing an alignment of stars, but with a big production show you can’t afford many stars- maybe one or two at the most. The production is what is expensive. That is one of the main reasons that the show was killed.”

Las Vegas has become home for many former Ice Capades “roadies”. Skaters, crew members, and management staff who honed their skills on the road have found new careers “under the lights” in Vegas- the “Live Entertainment capitol of the world”.

Chuck Walters, who toured with the show for many years and now makes Vegas his home said, “I can’t think of a better education or opportunity than touring and seeing the world with Ice Capades! However, I’m not sure that I would do it for twenty-two years again!”

Greg LeTourneau who is now the executive technical director of entertainment at the MGM Grand was formerly with the Capades for fifteen years, performing various roles from starting as a truck driver, audio supervisor, and then finally as a company manager. He looks back with appreciation for the opportunities to learn the necessary tools that provided the foundation to perform in his current job. “From the MGM Grand, Mandalay Bay, New York New York and beyond. At every major hotel here on the Las Vegas Strip, Ice Capades is well represented with former cast and crew now providing the backbone for so many of the city’s finest stage productions.” He said. “Thirty years ago I met Mike Beaver, who was a skater for a number of years before graduating into a crew position. Mike is now working for me as a technical manager for entertainment and twenty-seven years ago during my first year as a truck driver for West Company, a new skater began her first of many tours- Sue ‘Packy’ Packard. She is now my assistant here at the MGM.”

Minnie Madden, owner of Callback, was also a part of the Ice Capades family for many years. She was initially the director and choreographer and then she became the President of Productions for the show. “This opportunity was a dream come true,” she exclaimed! She went on to say, “To date it was my favorite job, and by far one of the greatest experiences of my life. I worked alongside other great choreographers including Nathan Birch, Tim Murphy, Billy Chapel, Peter Gordon and the late Robert Wagenhoffer. We produced the Warner Brothers show entitled “Looney Tunes on Ice’, and ‘Batman and Robin in the Big Freeze’, plus the ‘Magic of MGM.’ Working with these two major studios was a once in a lifetime opportunity and I learned a lot.”

I asked Minnie what her favorite part of her job there was. She said, “Working with the talent. The skaters were extraordinary…the very best. I had seen ‘Cinderella –Frozen in Time’ and was thrilled to have most of those skaters and the choreographers on board. I saw Dorothy Hamill as Cinderella in Los Angeles. How fabulous she was. It was an honor to be a part of something that she has been a part of. It was the best time for me and I was sad when Capades closed- still am.”

As you can imagine, with fifty-five years of friendships, a reunion in Vegas has to be a huge event filled with laughter and tears. People came from as far away as Norway and Australia to attend. “The reunion experience of taking you back in time to that ‘place’ has always exceeded my expectations and this time was no exception,” said former principal skater and performance director, David Nickel. He went on to say, “the greatest part of the reunion is the feeling you get from running into all of these people at the same time.”

The reunion started out on Sunday evening at the Flamingo pool for a cocktail party that was not to end there. In true Capades fashion, the party moved on to other bars until the early hours of the morning. I think a few of us even slept at the pool instead of our rooms! The next morning, there was a “Cast Photo” out on the lawn. What a fun meeting place and a snapshot that will last forever in our hearts and minds- not to mention film! Here is where just about 500 people gathered to “flex” and smile in true Capades fashion. Not only did we take a photo with everyone in attendance, but we also took decade photos so that we could keep track of each segment of history. Next up was the pool gathering. The organizers reserved an entire section of chairs, which are like high end real estate, at the pool. There was even a security guard that made sure no ‘random’ people snuck into our section. This was an informal gathering but was my favorite part. We sunbathed, swam, talked, ate, drank and reminisced all day long. I ended up taking a much needed nap (and I know others did as well) right in my chair.

Now it was time to get ready for the Gala Dinner that was held in the Sunset ballroom of the Flamingo Hotel. The dress was formal so as you can imagine, the sequins, glitter and diamonds all came out. The table decorations were beautiful and the food, served buffet style, was exquisite. There were many vintage show posters and memorabilia displayed at the entrance. Willy Bietak and Cathy Steele Bietak donated (for display) a set of twenty-five Ice Capades Dolls that were used for advanced publicity for the shows many years ago. The dolls wore original costumes from the show and each traveled with its own trunk. They also had many original costume sketches from the original designers on display. It was like taking a step back in time when we entered the banquet hall.

After dinner was served, the festivities began. The key speakers were Denise Eby, Greg Bonin, Jojo Starbuck, Ken Shelley and Terry Head. The intro speakers included, Don Watson, Julie Patterson, John Nicks, and Sarah Kawahara. The event was hosted by Olympic Silver medalist Peter Carruthers who was once a star of the show with his sister Kitty.

A few of the Performance Directors that were in attendance were Julie Patterson, Roxanne Watson, Dolly Pierce, Debbie Hummel Matthews, and Joan Catlin Napolitano.

A video of photos was played on a huge screen after the speakers were finished. Music was played and tears rolled. Memories that we all shared during the fifty-five year run were encompassed in film and music. It is hard to express the emotions that arise when you look back in time to hundreds of friends that are each a piece of such an incredible part of your life experience. Next, a, very emotional moment where we all stood and shouted out the names of our friends who were not longer with us, followed by a moment of silence, took place. Of course the party did not end there. The hotel bar was full of life (and Capades people) all night- and morning- long.

As David Nickel put it, “I can’t imagine another place (Las Vegas) that is more perfectly suited to hold a reunion like this. It has everything we need.” I have to agree. Vegas has everything for everyone twenty-four-seven.

This was my first reunion and definitely not my last. I had a blast seeing everyone and enjoying old friendships. I can’t wait until the next one in five years!

I want to leave you with a few quotes that encompass the overall feeling of the 65th Anniversary of Ice Capades reunion.