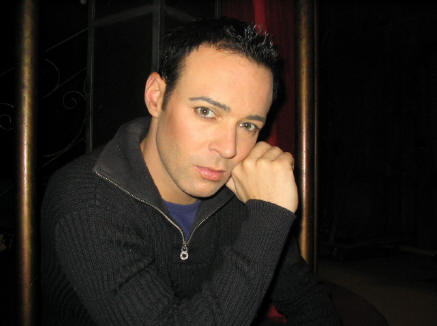 Michael Chack turned pro after the US National championships in 1999. His titles include, US Bronze medalist, Olympic Festival champion and World University Games champion. The last six years as a professional skater have been an incredible ride for this high achiever. I asked Michael why he decided to turn pro and not continue in the amateur ranks. He said, “I had suffered too many injuries towards the end of my career. I was not happy training anymore and I knew that I would never be a World champion, besides the fact that I was getting older!”

Holiday on Ice in Europe would soon be Michael’s calling. “Skating in ‘Holiday on Ice’ has been the best five years of my life. I am enjoying the love of skating again. I have concentrated on technique and artistry and have become a more all around skater,” he said. Not one to stay in one place for very long, tour life seems to be the perfect match for him. “I get bored in one place, “he said. “The more travel the better. It feels like a new adventure every week when we travel from city to city.”

I asked what the worst part of traveling was and he said, “I hate living out of a suitcase!”

Michael’s greatest skating moment happened at the Skate America International competition where he skated his absolute best and achieved a standing ovation from the entire crowd in the arena. “I will always go back and watch that tape,” he said. “I didn’t win, but I skated exactly how I had always wanted and trained to do.”

Michael resides in New York City when he is not on tour in Europe. He said that he will settle in New York once he is finished touring. “I prefer New York to settle down, ” he said. “Although, I love Europe because it is full of culture, charm, class ad old-world beauty.”

His most embarrassing moment happened during a performance when the crotch of his pants totally split open. “I had to skate off the ice backwards, “he said. “The wardrobe lady was frantically sewing my crotch up backstage while the skaters and the audience were all wondering what happened to me!”

I asked Michael if he still gets nervous while performing, even though he is not competing anymore. “Absolutely,” he exclaimed. “I think it is good to be nervous because that means you care about what you are doing. I am always nervous.” When asked how he deals with the nerves, he said, “Being out on the ice and being aggressive. Attacking the performance.” He went on to say, “I learned this as a professional but I really wish that I had learned it as an amateur. If I knew then what I know now, I would have been a better competitor and probably more successful and an amateur.”

This young man has a very bright future ahead of him. Choreographing for other shows and skaters is a passion of his, along with traveling, music, photography and hotel management. He would also like to get back in to commercial print work, catalogue work and modeling, all of which he dabbled in while still training. He plans to continue performing until the enjoyment is gone and his body can’t do it any longer. I asked him if there was anything that he regrets or would change in his past. He said, “No!” and then went on to say, “I have made a lot of mistakes in my life, but at the same time, these mistakes were the right decisions in my mind. I learned from them and grew as a skater, performer and person.” Go Chack, Attack!