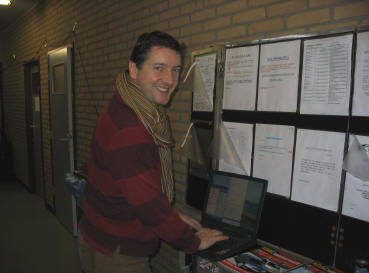 Winning the Olympic Gold medal at the Lake Placid games in 1980 was just the beginning for this extremely gifted skater, singer, dancer, artist and writer. When Robin Cousins was a child, all he wanted was to be a song-and-dance man. Skating was just an extracurricular activity that he did while growing up in the United Kingdom. Obviously, skating became a larger part of his life, and Robin showed great promise in the frozen sport. He was able to use his passion for dancing and music and bring them into a new forum-figure skating.

“When I was a kid, I wanted to be Gene Kelley; not a skater” he said with a chuckle. Robin won the hearts of skating fans all over the world with his beautiful jumps, spins, layout back-flips and musical choreography. His innate sense of style brought him many perfect scores and set him far above the rest of the pack. He turned professional in 1980 and continued to perform in shows and competitions for the next twenty years, until the year 2000 when he decided to retire. “I ended up retiring with ‘Holiday on Ice’ in Europe, the same company that I started with twenty years earlier,” he said. “I was lucky that I had other projects that I was working on at that point because it made the transition much easier. I had enough of triples, and back-flips and everything just fell into place.”

During the twenty years that Robin was a professional skater, he also took singling lessons and hoped to someday achieve his dream of being in the theater. He wanted to be hired because he was right for the job, not because he had an Olympic gold medal. That day finally came when he was asked to audition for Gillian Lynn for the hit musical “Cats.” “Auditioning for Gillian was amazing,” he exclaimed. “Then I had a second callback with Cameron Macintosh. One half hour later, I was on the tube, and I had a call from my agent telling me that I had the job!”

Robin performed in “Cats” for two and a half years. Four months in each city. “It was the most difficult thing I had ever done, but I learned so many things about another side of performing, ” he said. Then immediately after finishing his run of “Cats,” he went on to portray Frank ‘N’ Furter in the twenty-fifth anniversary tour of the “Rocky Horror Picture Show.” “Putting on fishnets, make-up, stilettos and a wig every night was a riot,”he said with a giggle. “I skated in the show. I would come out on stage and do little skating tricks in my stilettos. It was a great challenge. I loved it.”

In addition to performing, Robin has choreographed nine large-scale skating productions and directed three. Six of them were for “Holiday on Ice” in Europe, and three of them were for Feld Entertainment in the US. He also creates his own projects with his own company, Cousins Entertainment that is located in his hometown of Brighton, England.

Just when you think he has done it all, Robin goes in another direction and takes on a new challenge. “I just wrote a children’s book entitled, ‘Adventures in Frostavia.’ It is published by the ‘Book Guild’ and will be on the shelves as of October 1, 2004,” he said. “The story is set in winter land, and there is skating in it, but it is not a skating story. I’m really excited because I have a book signing at Harrods department store in London next week!”

I have worked with Robin over the last sixteen years and performed in three of his ice shows. His enthusiasm for skating has inspired me on many different levels. He is a perfectionist, but he also brings in the human aspect. He can relate to performers in many different ways to bring out the best in each person. I asked him what might be his next goal in life. He said, “I would love to go back on the stage. If another opportunity comes up, I would do it in a minute. I absolutely love to perform.”