Elvis Stojko – King of the Ice 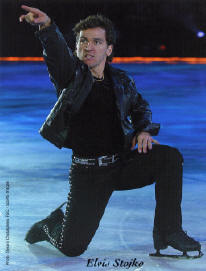 Elvis Stojko is a seven time Canadian champion, Two time Olympic silver medalist, and three time World Figure Skating champion. He has transcended the sport with his athletic and very masculine style and has now turned Pro to further his artistic elements. I have skated with and competed against Elvis many times. He was always a truly sincere competitor who would not only command attention on the ice, but off the ice as well. I recently sat down with Elvis and asked him a few questions. The following Q&A is what transpired.

Elvis: I had decided to compete last year, however in September of 2003 I contracted a virus of some kind. I was tired and sleepy all the time and had no energy. The doctor said that it was not mono and we never figured out what it was. I could only skate for about 10 to 15 minutes and I would have no energy. Even after I stopped training, it took me about a month and a half to get my energy back. So I decided to rest and enjoy my life with other things. It was a tough decision to make.

CH: You are an extremely accomplished athlete on many different levels. What is the secret to your longevity and success in skating?

ES: I have always been active in other sports. Even during the off season I would be doing something physical to stay in shape. When I was training, I would always listen to my body and if something did not feel right I would not push. This helped me from getting injuries more often.

CH: What is your motivation to keep performing as a pro figure skater? I mean, when you are tired and just not wanting to go into the rink to train, what gets you there?

ES: I have a deep passion for excellence in whatever I do. This passion gets me to the rink or gets me up when I’m tired. If I have a job to do, I make sure I get it done to the best of my abilities.

CH: What is your most memorable moment in skating?

ES: My most memorable moment was when I made the world team for the first time in 1990. I had not made the Canadian championships the year before, so I worked my butt off and got myself to Canadians the next year-and all the way to Worlds. The fans were standing 30 seconds before the end of my routine and I could not hear the music. It was awesome.

CH: What is your funniest or most embarrassing moment in skating?

ES: I was on the Champions on Ice tour one year and we were in St. Louis. We were taking two buses to the next city. I got on one bus, then told Jerod not to leave me behind since I was getting off to grab some food for the trip. We still had about 8 minutes, but they left anyway and they did not realize I was gone until about 2 hours into the trip. I had to fly to the next city and I got there within 30 minutes of the show. Jerod felt bad about totally forgetting about me.

CH: What goes through your mind right before you are going to compete? How do you deal with your nerves?

ES: When I was competing, all I had on my mind was two key points to focus on. No more than two, you have to keep it simple. These two points were for my jumps. They were related to every jump in the program. It could be an arm position, a timing issue, or hip position. Anything related to the success of the jump. I would focus on just being aware of what my body was doing and tried not to force anything, Allow the movement to happen. As for the nerves, I would make sure that the nerves would not take me over. I have a breathing technique that I would control this with.

CH: If you had one sentence to inspire people with, what would it be?

ES: Follow your instincts and your heart, they will always lead you in the right direction, you just have to learn to understand what they are saying.

Thank you Elvis. It was a pleasure talking with you and learning more about you as a skater and a person.