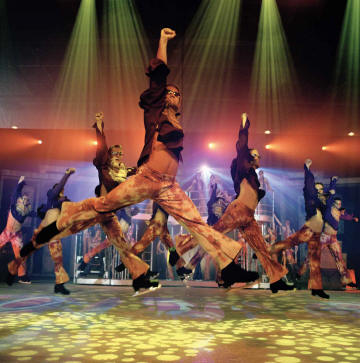 Holiday on Ice was always a show that I wanted to experience while I could still strap on my skates and perform. I have loved performing in many different shows all over the world during my Professional skating career and I am now happy to be involved with the new production of Holiday on Ice. The show is called “Hollywood.” The show starts out “behind the scenes” of a Hollywood set and works its way through various scenes–creating magic along the way.

Choreographed by Olympic Champion (and PFSC Member) Robin Cousins MBE and Cindy Stuart, and Directed by Anthony Van Laast MBE (who directs Mama Mia and many other popular musicals) the show is extremely colorful and exciting.

Some of the numbers in the show are:

The Action Hero (James Bond) performed by Ryan Mc Kinnon (PFSC Member) and his magnificent jumping act, including jumping through rotating hoops of fire. Ryan is great with the audience and gets the show moving right from the start.

Comedy: Featuring Oliver Pekar and Karoly Gaspar (PFSC Members) who is a two man acrobatic team. They are very funny and also perform many skating/acrobatic moves. They also do a “flying” routine where Oliver is suspended by a pole hanging from the ceiling and he is supporting Karoly with one arm while Karoly does many flexible gymnastic maneuvers. The audience loves the team and they are a great addition to the show.

The Mission number is a beautiful skating routine that brings light and dark (ballet and savage) together. The lighting, costumes and choreography are brilliant to this eye candy skating number.

Titanic is a sensual number that is performed by Azumi Sagara (PFSC Member) and Nick Keagan. The set is the bow of a ship and moves forward on the ice with Azumi eagerly awaiting her partner. They skate a beautiful routine full of tricks and emotion.

The end of the Act 1 is a 20 minute 80’s Number that has all the 80’s classic songs, great costumes, fast and intricate choreography, and lots of skaters on the ice acting it all out. Each principal is featured to different music. This section ends with all the principals and chorus dancing to “Footloose.”

Act two starts with Dr. Shivago. It is a trio between a husband, wife and the wife’s lover. The number takes place in Russia and has snow, beautiful lighting, costumes and sets. Skated by PFSC Members Craig Heath, Yulia Svechnikova and Alexander Svechnikov, the routine captures the romance of the scene with some exciting lifts, jumps, spins and drama.

Icons is the next scene. This scene is all about famous Hollywood Icons, including Audrey Hepburn (PFSC Member Tatiana Zaitseva), Marlon Brando (Michael Chack), Judy Garland (Irina Tkachuk), Ingrid Bergman and Humphrey Bogart (Sherry Kennedy and Slawomir Borowiecki) and Elvis (Julien Bouchard). Full of jumps and spins and moving sets, this number is received very well by the audience as it brings them back to an era long ago.

Silent Movie is a comical, cute, and fat moving scene that ends with Ryan Mc Kinnon jumping over seven “cops.” Charlie Chaplain is played by French skater Gregory Bouyssonnie and the vixen is played by Alexandra Schauman. The piano music was specially made for this cute and action packed number.

Hollywood Glamour is a throwback to a time gone past. Featuring Azumi Sagara and Nicholas Keagan and the entire ladies’ ensemble, the skaters look amazing as they dance and trick their way through this elegant and very intricate routine. Azumi and Nick are portraying the old-fashioned style of being in love.

Moulin Rouge has three sections and is a crowd pleaser. The number starts out with The Courtesans, featuring Lisa Michael (PFSC Member) , Magdalena Komorrowska and Victoria Timoshenko. The music is Lady Marmalade and the skating is pure sex. The three divas get all the men riled up. Not only are they “working it” but they are also performing some difficult tricks . . . especially Lisa Michael with her extremely high kicks and great dance moves.

Then the number changes to “Come what may” performed by Craig Heath (yours truly). I absolutely love this number and look forward to performing it every day.

After my slow piece, I am joined by two pair teams, Alexander Svechnikov with Yulia Svechnikova and Radek Dostal with Hilary Jurectic who lift their way through a romantic quartet that culminates with the entire ensemble entering the ice to do the Famous Holiday on Ice Precision number. Robin and Cindy are masters at making the precision numbers exciting and unique while keeping it in character with the music. Can Can is the music and the energy in the arena lifts to the ceiling while they are skating.

Next is the Famous “flying” number with Oliver Pekar and Karoly Gaspar followed by a “principal” number that is extremely fast and includes many challenging tricks. Following this is the grand Finale that is rich is Holiday on Ice style. Costume designer Bonita Bryg (diva) has created an eye candy spectacle that has to be seen to be believed.

All in all, this new production has gained much recognition and many standing ovations and is continuing to gain momentum as it travels through Germany and France.

I have loved joining Holiday on Ice. I was a bit skeptical when I first thought about it, but after visiting a couple of their shows last season, it looked like a great place to work. Not only do I get to perform in a great skating show, but I get to travel Europe and experience life on this side of the world. The company has been extremely honorable and generous and I am very happy with my decision to join.

Holiday on Ice- Hollywood is currently touring Germany and France. 14 German cities and 20 French cities will be played during his year’s tour which ends May 25, 2003.

For more information about Holiday on Ice go to www.holidayonice.com OR check out their profile in the PFSC website.

« Memories of Brian Wright
Look at All the People Here Tonight »